We are located at the Loughcrew Cairns. Take a hike from our centre to visit these ancient passage tombs which are over 5,000 years old. Our favourite time to visit is sunset, sunrise and full moons but they are spectacular any time of day. To find out more about the Loughcrew cairns CLICK HERE. 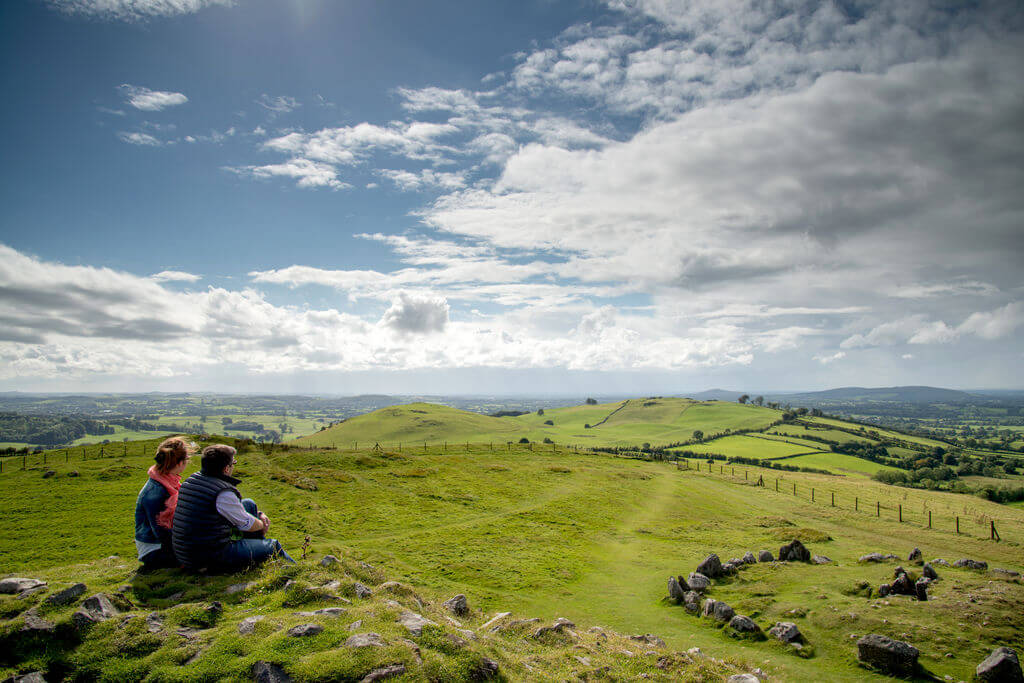 This cottage is the perfect example of a traditional Irish home. Our family built this cottage in the late 1700s and it was inhabited until 1966. We restored the cottage in 2014. Little did our ancestors know that it would be the inspiration for opening Loughcrew Megalithic Centre. 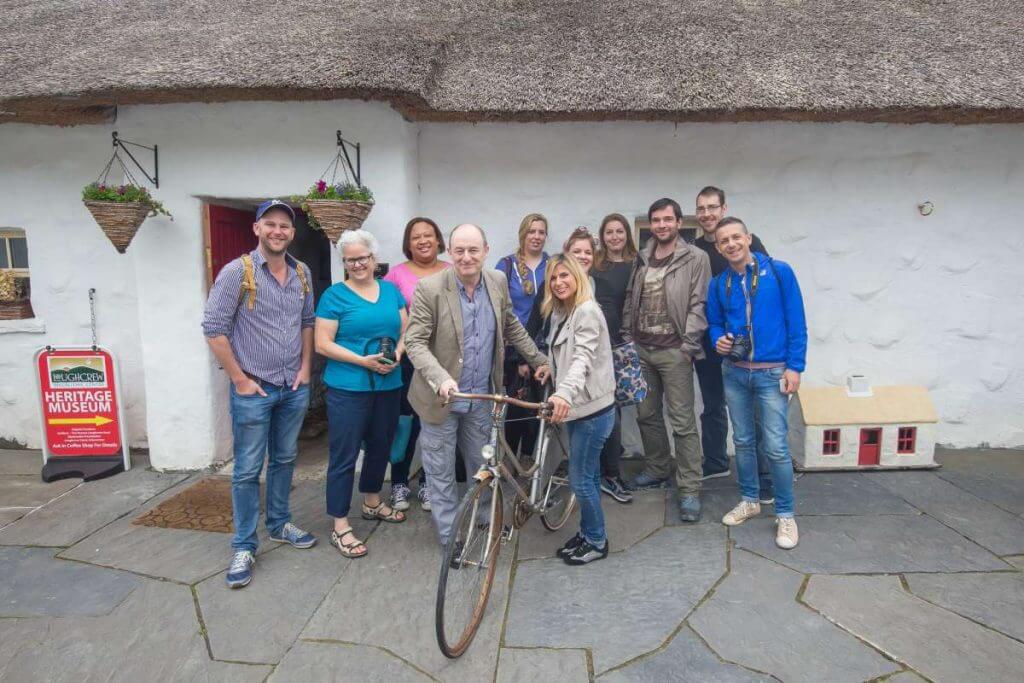 St Fechin founded this Christian monastery in the 7th Century. At one stage 300 monks lived in the community. Over the years the monastery was set on fire 12 times. Don’t worry though, there is still plenty to see. Find out about the The Seven Wonders of Fore which include; the tree that won’t burn and the water that won’t boil.

Cavan County museum is a fantastic museum with artefacts and information starting from Neolithic times right up to the 19th and 20th centuries. Some of its exhibitions include; the archaeology room, the great famine, folklife and the WWI trench experience.

Newgrange, Knowth and Dowth are world famous Neolithic monuments. Newgrange was built around 3,200 BC. Similarly, to Loughcrew it is older than Stonehenge and the pyramids of Eygpt. To get access to the passage tombs you need to go through the visitor centre.

It took Hugh De Lacy and his son Walter 30 years to construct Irelands largest Anglo- Norman castle. The castle opened to the public in 2000 after being excavated and restored. The movie Braveheart was also filmed here in 1995. A stunning location on the River Boyne.

The Hill of Tara is an ancient ceremonial site where the High Kings of Ireland were inaugurated. There are a number of monuments across the site which date from Neolithic times to the Iron age including: Mound of the Hostages and the Lia Fail or ‘’Stone of Destiny’’

The Military of War Museum is not your typical museum. William and the team encourage you to pick up weapons and feel what it was like to handle them. They have a playground, inflatable obstacle courses and you can even drive a real tank. Exhibits include; World War 1, World War 2, Easter Rising 1916, Vietnam War and the Gulf War.

The Hill of Uisneach is an ancient and ceremonial site which consists of numerous monuments and earthworks including a megalithic tomb, standing stones, burial mounds, holy wells and a medieval road. Uisneach is near the geographical centre of Ireland and is deemed to be the symbolic and sacred centre of Ireland.

Battle of the Boyne Visitor Centre

This visitor centre gives a great insight into the battle between King William and King James in 1690 through detailed displays and historical re-enactments. It is the site of the largest number of troops on an Irish battlefield (approx. 60000). The centre is located in an 18th century house and contains original weapons and a laser model of the battlefield.

Tullynally castle and gardens date back over 350 years. There are over 12 acres of garden to explore which are dividedbetween walled gardens, extensive woodland gardens and 2 ornamental lakes.

Kells -  The Monastic World of Saints and Scholars

The monastic enclosure in Kells protected St. Columbas Church, the Round Tower and 4 of the towns high crosses. It is thought that the Book of Kells was completed at St. Coum Cille’s House which is positioned at one of the highest points in the town. Visit Kells Heritage Centre to see a replica of the Book of Kells and for more info on the town.

The Spire of Loyd is also known as Ireland’s only inland lighthouse. The structure was built in 1791 for the First Earl of Bective and to provide work during the time of a local famine. Today there is a nice playground at the site for kids to play on.

St. Ciaran’s Well is one of the most beautiful ancient wells in Ireland. The well was sacred long before St. Ciaran however it was Christianised throughout the years. Different areas of the well have different cures. Drinking the water is said to heal throat problems, another area is said to heal problems with feet and ankles and another area cures back issues. Either way it’s a hidden gem and a beautiful place to visit.

This monastic settlement was founded in the 5th century and includes two churches, round tower but its most famous for its high crosses. Muiredeach’s High Cross is 5.5 meters high and is regarded as the finest high cross in Ireland

Tayto park offers a huge variety of things to do and experience. They have attractions for all ages. Younger guests can enjoy fun and exciting activities, whilst older guests and thrill-seekers can get the adrenaline rush they have been looking for.

Lough Lene is a favourite of locals and returning guests. Access at ‘‘The Cut’’ near Collinstown is the safest place to swim. There are dressing rooms and picnic areas available as well as a jetty and diving board. Swimming, fishing and windsurfing are popular at Lough Lene.

Lough Sheelin is the largest lake in Cavan and is said to be one of the best trout lakes in Europe. Fishermen will also find pike and a large population of coarse fish. The fly population at Sheelin is plentiful making Sheelin a top dry fly venue and then there is the Mayfly which brings the lough to the boil.

Mullaghmeen Forest is said to be the largest beech tree forest in Europe. Along with beech, it also has Sitka spruce, Scots pine, noble fir and an interesting collection of native trees. Three looped walks for varying levels of fitness (3km, 5km, 8km routes). The summit of the red trail gives you the best views over Lough Sheelin in Cavan.

Located in Oldcastle this 18-hole course is open to the public. Enjoy with family and friends, or even by yourself.

Funtasia’s indoor water park has over 200 different water based activities for the entire family including thrilling water slides, pirates cove and an area for toddlers.

Sheridans Cheesemongers specialises in cheese and high quality artisan food products. The food market is open every Saturday from 10am and is a great place to pick up cheese, meat, wine, pasta and much more.

Loughcrew house and gardens date back to the 17th century. Among the gardens you will find a medieval motte, St. Oliver Plunkett’s church, lime/yew avenues, extensive lawns and a Fairy Trail for kids. They also have longer walks which take in Loch Craobh.

Cavan Adventure Centre has a wide range of land and water activities to choose from. Activities include: kayaking, canoeing, guided boat tours, archery, biking, and an inflatable water park.

Rural Adventure Tours provides tailor made adventure and cultural tours for families, groups and solo travellers. The tours can be tailored to include popular destinations in Ireland, cultural experiences, food experiences and less known hidden gems. He also can include activities which include; kayaking, hiking and rock climbing.

Boyne Boats offers a guided tours of the Boyne Canal and Boyne River in handmade traditional Irish Currachs as seen in Game of Thrones. Ross is a fantastic storyteller and will take you through the history, heritage and mythology of the boyne and its surrounding landscape.

A guided tour of Slane Castle and the Slane Distillery. See and learn how the distillery make their Signature Triple Casked Irish whiskey from grain to the final product. The tour includes a tutored tasting session and tour of the castles 18th century interiors.